You already know that all nouns in German are classified grammatically as masculine, neuter, or feminine, which is indicated by a form of the definite article: “der” (masculine), “die” (feminine), or “das” (neuter), all meaning “the”.

When we use a noun or pronoun in a sentence, we also assign specific cases to those nouns and pronouns to signal their function in the sentence. There are four cases in German. Today, we are focusing on the nominative case. Look at the following example sentences:

The bolded parts are in the nominative case, because they are the subjects of the sentences.

*ACHTUNG* The subject of a sentence is always in the nominative case.

Übung 1. Drag the noun to the correct article.

German uses three definite articles, “der” (masculine), “die” (feminine), or “das” (neuter), all meaning “the”, to show the gender of a noun.

Übung 2 (Reminder: If you get it wrong you can correct it right away. Just continue typing in the “red” box to make your correction.)

There are several ways to express negation in German. Look at the following three sentences:

We can also negate a sentence by using “nicht” (not). It can be placed in different parts of a sentence depending on what we want to negate or emphasize. Over the next few units we will begin to see the different placements of “nicht”. 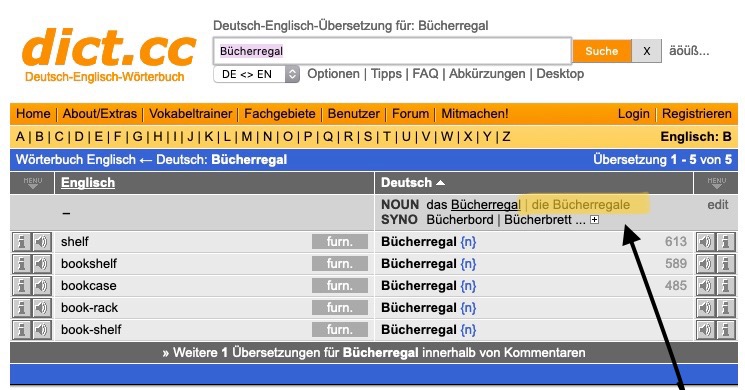 In English, most plurals are formed by adding an “-s” or “-es” to the noun (e.g., students, classes, pens), although there are some irregular plural forms in English (e.g., women, children, geese).

Forming the plural of nouns in German is a bit more complicated than in English. There are several rules one could memorize, but that wouldn’t account for the exceptions. We recommend that you learn the plural form of each noun when you are learning the noun itself: das Bücherregal, die Bücherregale.

die Lampe, -n  (this means: you just add -n to the noun; die Lampen is the plural form)

das Fenster, – (this means: you don’t add an ending to the noun; die Fenster is the plural form)

die Mutter, -¨  (this means: you don’t add an ending to the noun, just the Umlaut on the vowel; die Mütter is the plural form)

Be sure to write down the forms as you will need them in the quiz.

Video Serie – Nicos Weg
Click on the link and watch the video. Then click on “start” under the video and do the exercises.

Extra Hilfe – lingoni GERMAN
Click on this link if you have any questions or want more examples of “Das ist… /Das sind…“.

Willkommen: Deutsch für alle by Claudia Kost and Crystal Sawatzky is licensed under a Creative Commons Attribution-NonCommercial-ShareAlike 4.0 International License, except where otherwise noted.