One employment function of a settlement practitioner is evaluating client need. Likupe, Baxter, and Jogi (2018) report in their study on perceptions of elder immigrant clients and care workers that older immigrants are often stereotyped as having physical deficits, particularly clients from other cultures (p. 186). There is a lack of understanding of elderly newcomers from different cultural and ethnic backgrounds (p. 184). For example, elderly immigrant seniors want to be respected and want to maintain their dignity, for example, by maintaining personal space, particularly when service providers such as healthcare professionals approach them without giving a warning or explanation as to why. Furthermore, elderly immigrants from some cultures have indicated that they preferred that workers address them by their titles and not by their first names (p. 184). Also, multi-tasking while speaking with an elderly person shows a lack of care or interest and may be perceived as being disrespectful. Stopping to give time and space to the speaker improves trust. Additionally, King‐Shier, Lau, Fung, LeBlanc, and Johal (2018) report in their clinical study that Asian and Chinese patients in Calgary identified a need for more language-specific clarity in access of information, as well as a need for more cultural sensitivity by healthcare providers, specifically including family members in healthcare discussions (pp. 1519–1527). Effective communication must be “jargon-free and language-specific” (p. 1527). Service providers should consider the attributes of individual clients rather than focusing on differences. These attributes include the client’s immigration experience, number of years in Canada, language ability, education level, and community supports. 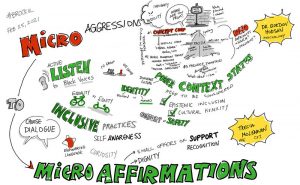 Evaluating client need also requires reflection from the settlement practitioner. The settlement practitioner should spend time reflecting on their own perceptions and attitudes when it comes to ethnicity, gender, and age. There are everyday microaggressions that may be unconsciously committed in conversations between a client and a settlement practitioner. Microaggressions are everyday actions, statements, or behaviours that have become normalized that are offensive, discriminatory, or racist and are perpetuated against a minority group through language, actions, or behaviours by a dominant group. Because there are multiple intersections when discussing diversity, such as immigration class, age, gender, race, language, and socio-economic status, it is important to evaluate self-assumptions about a person or group of people to enact ethical communicative practices and to demonstrate strong professional codes of conduct. Microaggressions related to age may include questions or comments made to an older person such as the following:

Wayne is a settlement practitioner who is meeting Wei for the first time. They have a one-hour session planned to identify services that Wei may require. Wei in arrived in Calgary approximately three weeks ago. She lives in an extended family household that includes her oldest son, his wife, and two daughters. Wei is a widow and has begun making friends at a local fitness park. Wei was a dentist in China prior to her arrival in Canada and lived an active lifestyle. She studied at all-English schools from primary to post-secondary. Prior to arriving in Canada, Wei injured her leg in a boating accident; the leg never healed well and has left her needing to walk with the aid of a cane. Next month, Wei will celebrate her 70th birthday and is looking forward to going to an outdoor park with her family and newfound friends. Wei is interested in mentoring young people in dentistry and is curious about volunteer opportunities in this area. When Wayne meets Wei for the first time, he notices that Wei has a slight limp. Wayne begins to wonder if he should have had a translator included in the meeting. Wayne begins to make a call to see if any translators are available.

INSTRUCTOR NOTE
This activity can be done in pairs or small group. If utilized in the OER, learners may choose to reflect only, then check responses under What You Should Do as Practice.

Wayne has already made a few errors in his initial interaction with Wei and has corrected himself by asking a few simple interactive questions. However, in Wayne’s questioning, he uses a “sing-song” or “baby” type of tone with the client and refers to her as “Dear,” asking “Can I get you anything, dear?” There is a 35-year age difference between Wei and Wayne.

INSTRUCTOR NOTE
This activity can be done in pairs or small group. If utilized in the OER, learners may choose to reflect only, then check responses under What You Should Do as Practice.