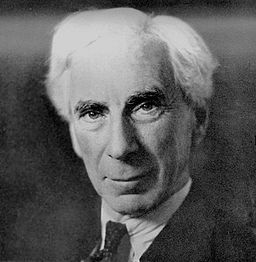 Bertrand Arthur William Russell, 3rd Earl Russell, 1872 – 1970 CE, was a British philosopher, writer, social critic and political activist. In the early 20th century, Russell led the British “revolt against idealism.” He is considered one of the founders of analytic philosophy.  Russell was an anti-war activist and went to prison for his pacifism during World War I.   He did conclude that the war against Adolf Hitler was a necessary “lesser of two evils.”  He won the Nobel Prize in Literature in 1950 “in recognition of his varied and significant writings in which he champions humanitarian ideals and freedom of thought.”

In “Reflections on My Eightieth Birthday” (“Postscript” in his Autobiography), Russell wrote: “I have lived in the pursuit of a vision, both personal and social.

Social: to see in imagination the society that is to be created, where individuals grow freely, and where hate and greed and envy die because there is nothing to nourish them. These things I believe, and the world, for all its horrors, has left me unshaken”.

You might find it interesting to see the two things that he believed he would like to say to a future generation.  It takes less than 2 minutes to watch; in 1959, this is what Bertrand Russell had to say (click on the link):

Bertrand Russell by Southern Alberta Institution of Technology (SAIT) is licensed under a Creative Commons Attribution-NoDerivatives 4.0 International License, except where otherwise noted.