We have examined steps to help you investigate and build an effective speech, and discussed some myths, and realities, associated with public speaking. In order to prepare you for success, let’s revisit some obstacles you’ll want to avoid in order to make your content as accessible to your audience as possible. To build on what we covered, let’s examine three key barriers to an effective speech: language, perception, and ethnocentrism. As a speaker, you will need to make an effort to consider each one and how you will create a bridge, rather than contribute to a barrier, with your audience.

Language serves both to bring us together and to help us reinforce our group status. Language can include established languages, like Spanish or French; dialects; or even subtle in-group language styles within a larger language context. Have you ever been part of a group that has its own words or phrases, expressions that have meanings understood only by the members of your group? It is not unusual for families, groups of close friends, classmates, and romantic couples to develop these kinds of “private language.” When a group communicates in its own way, it can create a sense of belonging, reinforcing your membership and place in that group.

People often tell each other stories, which often communicate a value or meaning in the culture. Perhaps you have heard the saying, “The early bird gets the worm,” with its underlying meaning that the one who is prepared and ready gets the reward. In North America, this saying is common, and reflects a cultural value about promptness and competition. Diverse cultures have diverse sayings that reflect differences in values, customs, and traditions

Judy Pearson, Paul Nelson, and Joseph DeVito describe two key areas of language that serve to bring us together, but because they involve a specialized knowledge unique to the group or community, they can create barriers to outsiders. These are often called co-languages, because they exist and interact with a dominant language but are nonetheless distinct from it. Jargon is an occupation-specific language used by people in a given profession. Think of the way medical caregivers speak to one another, frequently using abbreviations for procedures and medications. Slang is the use of existing or newly invented words to take the place of standard or traditional words with the intent of adding an unconventional, nonstandard, humorous, or rebellious effect. Think of how the words “cool,” “glitzy,” or “scam” are used in casual conversation. In addition to language-based barriers, there are also several factors, many of which we have visited in previous chapters, which can act as barriers to effective intercultural communication.

Perception is an important part of the communication process, and it is important to recognize that other people’s perceptions may be different from our own in several ways.

Your cultural value system, what you value and pay attention to, will significantly affect your speech and how your listeners perceive it. North American culture places an emphasis on space, with an “appropriate” distance while shaking hands, for example. If a North American travels to France, Spain, or Chile, he or she will find that a much smaller sense of personal space is the norm, and may receive a kiss on the cheek as a greeting from a new acquaintance. If the North American is uncomfortable, the person from France may not attribute his or her discomfort to personal space, and they may have a miscommunication. Learning about other cultures can help you adapt your speech in diverse settings, and make you more comfortable as you enter new situations where others’ perceptions are different from your own.

Role identities, which involve expected social behaviour, are another aspect of intercultural communication that can act as a barrier to effective communication. How does your culture expect men and women to act and behave? How about children, or elders, and older citizens? The word “role” implies an expectation of how one is supposed to act in certain settings and scenes; just like in a play or a movie, each person has a culturally bound set of role expectations. Who works as a doctor, a lawyer, a nurse, or a welder? As times and cultures change, so do role identities. Business management was once perceived as a profession dominated by men, but in recent decades women have become actively involved in starting, developing, and facilitating the growth of businesses. As a speaker, your role will necessarily involve preparation and practice, and to a degree an element of leadership as you present your content and guide your audience through it. Your audience also has a role, which involves active listening and displays of interest. Your overlapping roles of interest in the topic are keys to an effective speech.

Goals reflect what we value and are willing to work for and vary widely across cultures. In some cultures, an afternoon lunch is the main meal of the day, a time with the family, which is followed by a siesta or resting period. In the United States and northern Europe, people often have a quick lunch or even a “working lunch,” with the emphasis on continuing productivity and the goal of personal and organizational achievement. The differences in values, such as family time versus work time, establish themselves in how we lead our lives. To a European who is accustomed to a full month of vacation each year, the thought of someone from the United States spending a few intense, three-day power weekends hiking, skiing, or sailing might seem stressful. To a goal-oriented North American, the power weekend may be just the rejuvenation required to get “back in the game.” Time, and limits on it, will be an important goal in your speech. 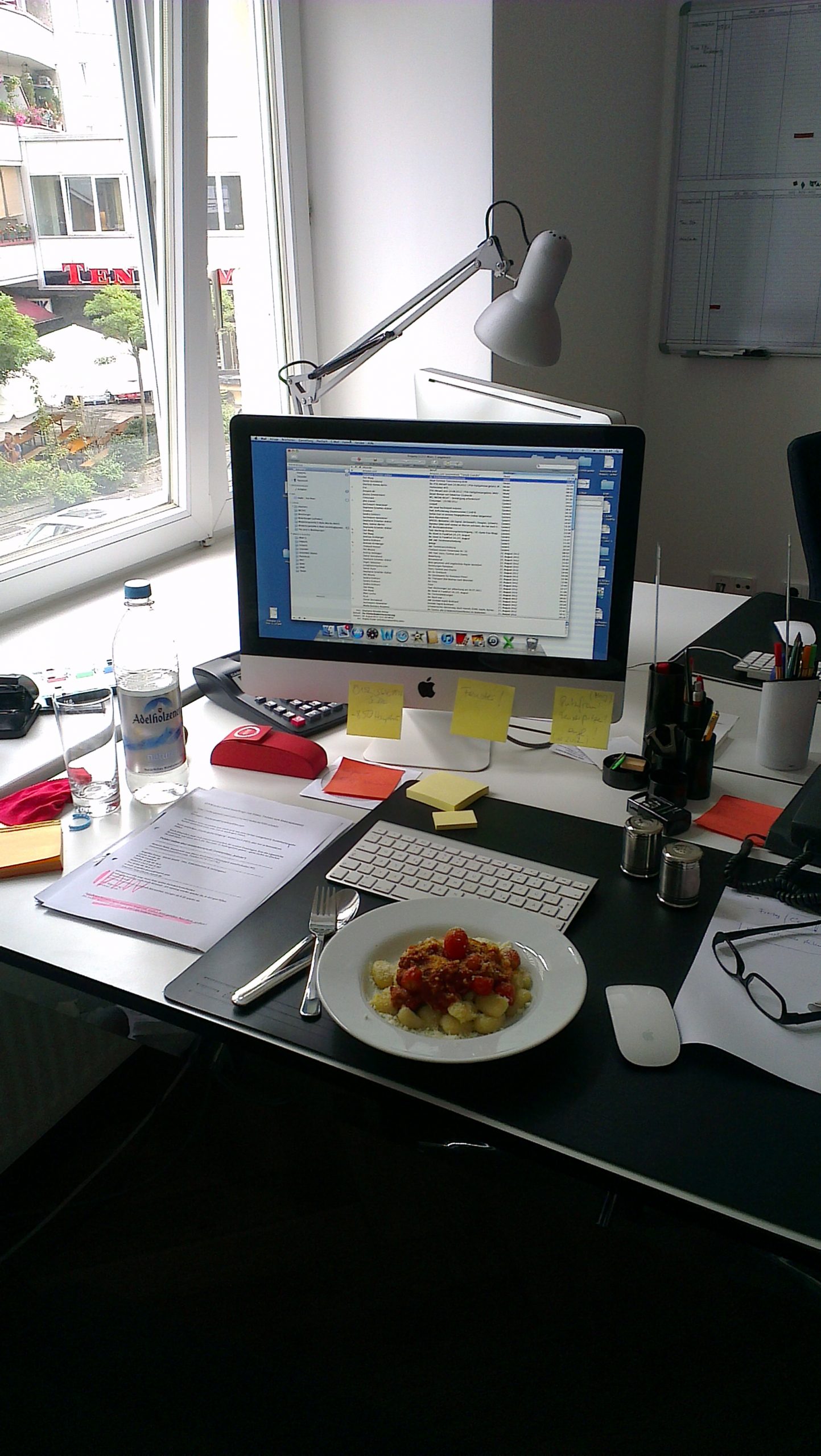 While lunch for many cultures is a prolonged affair that marks a significant break in the work day, for others, it means a quick meal at the desk.
CCO, attribution Angela Huster, free for commercial use

Geert Hofstede has spent decades researching the concepts of individualism versus collectivism across diverse cultures. He characterized U.S. culture as strongly individualistic: people perceive things primarily from their own viewpoint, see themselves as individuals capable of making his or her own decisions, and feel responsible for their actions and solving their own problems (Hofstede, G., 1982). He also found many countries in Asia and South America to be much more collectivistic, focusing on the needs of the family, community, or larger group. In this context, cultural background can become a barrier to an effective speech if your fail to consider your audience and their needs.

In addition, there are other cultural dimensions that influence how we relate to the world that impact our intercultural communication. Carley Dodd discusses the degree to which cultures communicate rules explicitly or implicitly (Dodd, C., 1998). In an explicit context, the rules are discussed before we hold a meeting, negotiate a contract, or even play a game. In the United States, we want to make sure everyone knows the rules beforehand and get frustrated if people do not follow the rules. In the Middle East and Latin America, the rules are generally understood by everyone, and people from these cultures tend to be more accommodating to small differences and are less concerned about whether or not everyone plays by the same rules. Our ability to adapt to contexts that are explicit or implicit is related to our ability to tolerate uncertainty (Hofstede G., 1982).

In the United States, we often look to guiding principles rather than rules for every circumstance, and believe that with hard work, we can achieve our goals even though we do not know the outcome. In Peru, Chile, and Argentina, however, people prefer to reduce ambiguity and uncertainty, and like to know exactly what is expected and what the probable outcome will be (Samovar, L., Porter, R., and Stefani, L., 1998).

When we consider whether a culture as a whole places more emphasis on the individual or the community, we must be careful to recognize that individual members of the culture may hold beliefs or customs that do not follow a cultural norm. Stereotypes, defined as generalizations about a group of people that oversimplify their culture (Rogers, E., and Steinfatt, T., 1999), can be one significant barrier to effective intercultural communication. Gordon Allport, a pioneer in the field of communication research, examined how and when we formulate or use stereotypes to characterize distinct groups or communities. He found that we tend to stereotype people and cultures with which we have little contact (Allport, G., 1958).

In addition, your first-hand experience will provide you with an increased understanding of prejudice. Prejudice involves a negative preconceived judgment or opinion that guides conduct or social behaviour. Within the United States, can you make a list of people or groups that may be treated with prejudice by the majority group? Your list may include specific ethnic, racial, or cultural groups that are stereotyped in the media, but it could also include socioeconomic groups or even different regions of the United States. For example, Native Americans were long treated with prejudice in early Western films. Can you imagine, in other countries they may also treat groups with prejudice? In many parts of South America, indigenous people are treated poorly and their rights as citizens are sometimes not respected. Has treatment of Native Americans changed in North America? It has also changed, and continues to change in North and South America.

People who treat other with prejudice often make judgments about the group or communities. As Allport illustrated for us, we often assume characteristics about groups with which we have little contact. By extension, we can sometimes assume similarity that people are all basically similar, in effect denying cultural, racial, or ethnic differences. We sometimes describe the United States as a “melting pot,” where individual and cultural differences blend to become a homogeneous culture. This “melting pot” often denies cultural differences. The metaphor of a “salad bowl,” where communities and cultures retain their distinctive characteristics or “flavor,” serves as more equitable model. In this “salad bowl,” we value the differences and what they contribute to the whole.

We can also run the risk of assuming familiarity with cultures when we attribute characteristics of one group to everyone who has connections to the larger culture. For example, people may assume that we are familiar with all Native Americans if we know one tribe in our community, forgetting the distinct differences that exist between tribes and even between individual Native Americans who live either in urban areas or on reservations.

Finally, your experience may help you to not view the world and its diversity of cultures in an ethnocentric way. Ethnocentrism means you go beyond pride in your culture, heritage or background and hold the “conviction that (you) know more and are better than those of different cultures” (Seiler, W., and Beall, M., 2000). This belief in the superiority of one’s own group can guide individual and group behaviour. If you visit a new country where people do things differently, you would be considered ethnocentric if you viewed their way as wrong because it is not the same way you were taught. Groups are considered ethnocentric if they prejudge individuals or other groups of people based on negative preconceptions.

For a successful oral presentation, do your best to avoid obstacles to understanding, such as language expressions (i.e., unknown to other listeners), cultural perceptions, and ethnocentrism.

Business Communication for Success by Southern Alberta Institute of Technology is licensed under a Creative Commons Attribution-NonCommercial-ShareAlike 4.0 International License, except where otherwise noted.