The following are suggested answers to the lab exercises for Labs 1 to 10 in A Practical Guide to Introductory Geology. Answers to the practice exercises are provided in Appendix 2.

6. The “elbow-like” kink in the Hawaii-Emperor chain is widely ascribed to a change in direction of the Pacific Plate moving over the stationary mantle plume, but a more plausible explanation is that the Hawaiian mantle plume has not actually been stationary throughout its history, and in fact moved at least 2,000 km south over the period between 81 and 45 Ma. 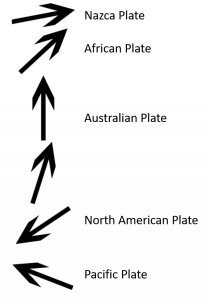 8. a) and b) are both divergent boundaries.

Part I: Cleavage and Fracture

*Note it can be challenging to see the two cleavage planes in this sample.

3. Any of the feldspar samples (potassium feldspar or plagioclase) as well as the pyroxene sample also have two cleavage planes at ~90°.

4. Hornblende (amphibole) has two cleavage planes at approximately 56° and 124° (describe this at 2 not at 90° for the purposes of this course).

6. Curved, smooth. This sample does not exhibit cleavage.

4. Streak is the same red-brown colour

1. All are part of the sulphide mineral group (all mineral formulae end with a sulphur anion (S)).

2. Pyrite may scratch the glass plate, all others are too soft to scratch glass.

6. Varies – can be non-metallic (resinous, vitreous, adamantine) or metallic to sub-metallic

9. Pyrite is harder, chalcopyrite has a greenish-black streak and tarnishes to bright purple-blue-yellow (peacock-like) colours.

13. Galena is the principal ore of lead. Lead is used in lead-acid batteries, as well as in ceramics and glass.

14. Galena is extracted along with any other ore minerals and waste rock from a deposit. Depending on the size, shape, and depth of the deposit, this might be via an open pit mine where ore is accessed from the surface, or via an underground mine where ore is accessed along shafts and levels. The rock extracted from the deposit is ground into a fine powder, and then the material is separated into ore concentrate and tailings (waste). The concentrate is sent to a smelter, the lead-zinc smelter in Trail, B.C., to be refined into pure lead metal. This pure metal can then be sold to manufacturers.

2. vitreous or satiny, can be silky (selenite variety of gypsum forms as fibrous, silky crystals)

4. Gypsum is used to make wallboard or drywall. Nova Scotia is the most productive gypsum mining area in the world!

2. What is the approximate hardness of the two minerals on the Mohs scale of hardness?

7. Yes, flint also has a hardness of 7 and conchoidal fracture.

2. 2 cleavage planes at 90° for all feldspar samples

4. Only plagioclase feldspar has striations. Only some potassium feldspar have exsolution lamellae – wavy, irregular ‘veiny’ lines that may appear as a slightly different colour than the rest of the sample (e.g., paler pink, cloudy more opaque white).

3. elastic ‘sheets’ that can bend, one perfect ‘basal’ cleavage plane

4. Muscovite is light in colour (almost colourless), biotite is dark brown to black in colour due to iron (Fe) and magnesium (Mg).

2. shades of green to almost black

4. vitreous lustre, no cleavage, hardness = 6.5-7.5, and colour (colour can vary but typically shades of red to red-brown)

6. sugary, granular (small crystals that look like grains of sugar)

2. The colour of an igneous rock is an indication of its composition (mafic, intermediate, felsic). The composition of the magma controls which minerals will crystallize and the colours of the minerals are reflected by the colour of the rock.

5. look at a fresh surface

22. yes on plagioclase and amphibole phenocrysts

23. Some samples have only 1-2 mm laths of white plagioclase (bladed elongate shaped crystals), others have only 3-5 mm amphibole (dark green to black), some may have both.

28. no – although size varies depending on which sample you have, within each sample crystals are all of similar size

33. intermediate in colour, black and white rock, no pink minerals

36. yes, plagioclase (may be dark grey in colour and difficult to tell apart from pyroxene!), pyroxene

38. mineralogy, different minerals give each sample a different appearance (colour). R1 is light in colour (felsic), R31 is intermediate, and R51 is dark in colour (mafic).

42. extrusive, aphanitic texture implies rapid cooling at or near the surface

45. vesicles. Formed from mafic lava flowing on the surface that cools rapidly as gases escape, leaving gas bubbles preserved in the basalt.

46. texture – one is vesicular and the other is not

50. Both are glassy, however pumice appears frothy as it consists of small shards of glass welded together with many vesicles whereas obsidian looks like a solid, massive piece of glass. There is also a colour difference: obsidian is dark brown to black in colour whereas pumice is pale in colour (may be white, grey, buff, or tan).

2. All four samples are detrital (clastic) in origin. In all but R181 the clasts or grains are large enough to see that the rock clearly has a clastic texture consisting of fragments of pre-existing rocks or minerals cemented together to form a clastic sedimentary rock.

3. Note that this is a generalized diagram and other correct answers are possible. The key is to clearly show that:

b) Mechanical weathering, and later erosion and transport, break the granite into smaller fragments. Chemical weathering acts primarily on the ferromagnesian and feldspar minerals as these are relatively unstable at the Earth’s surface. Increased transport typically results in better sorting of grains and in increased rounding. The feldspathic sandstone (R162) still contains feldspar fragments that are sub-angular, suggesting that it has experienced less transport and less chemical weathering than the quartz sandstone (R161), in which unstable minerals have been weathered out leaving predominantly well sorted rounded quartz grains.

12. Both contain evidence of living organisms (shells), both are composed primarily of calcite and therefore both react with HCl. Coquina is distinguished by poorly cemented shell fragments that create a weak, somewhat crumbly rock. Fossiliferous limestone is a much more competent (i.e., stronger) rock.  Fossiliferous limestone can contain a wide variety of fossils, including shells or any number of other organisms whose skeletons are made of calcite.

13. Broken up shells of microscopic organisms cemented together are inherently not as “hard” or as resistant to scratching as a large, solid crystal of calcite.

15. From accumulated plant matter in swamps and bogs, where decaying organic matter is buried and heated to form peat and eventually coal.

8. Hardness ~3 (harder than a fingernail, softer than a penny)

11. Yes – broadly speaking they have the same mineral composition. There may be small differences if, for example, the protolith was not a pure calcite limestone or a pure quartz sandstone. Textures have changed and in both cases grain size has increased as a result of metamorphism. The limestone protolith could have exhibited a number of textures (crystalline, oolitic, fossiliferous, bioclastic), but the resulting marble is always crystalline. Quartz sandstone has a clastic texture that recrystallizes to form the crystalline quartzite. 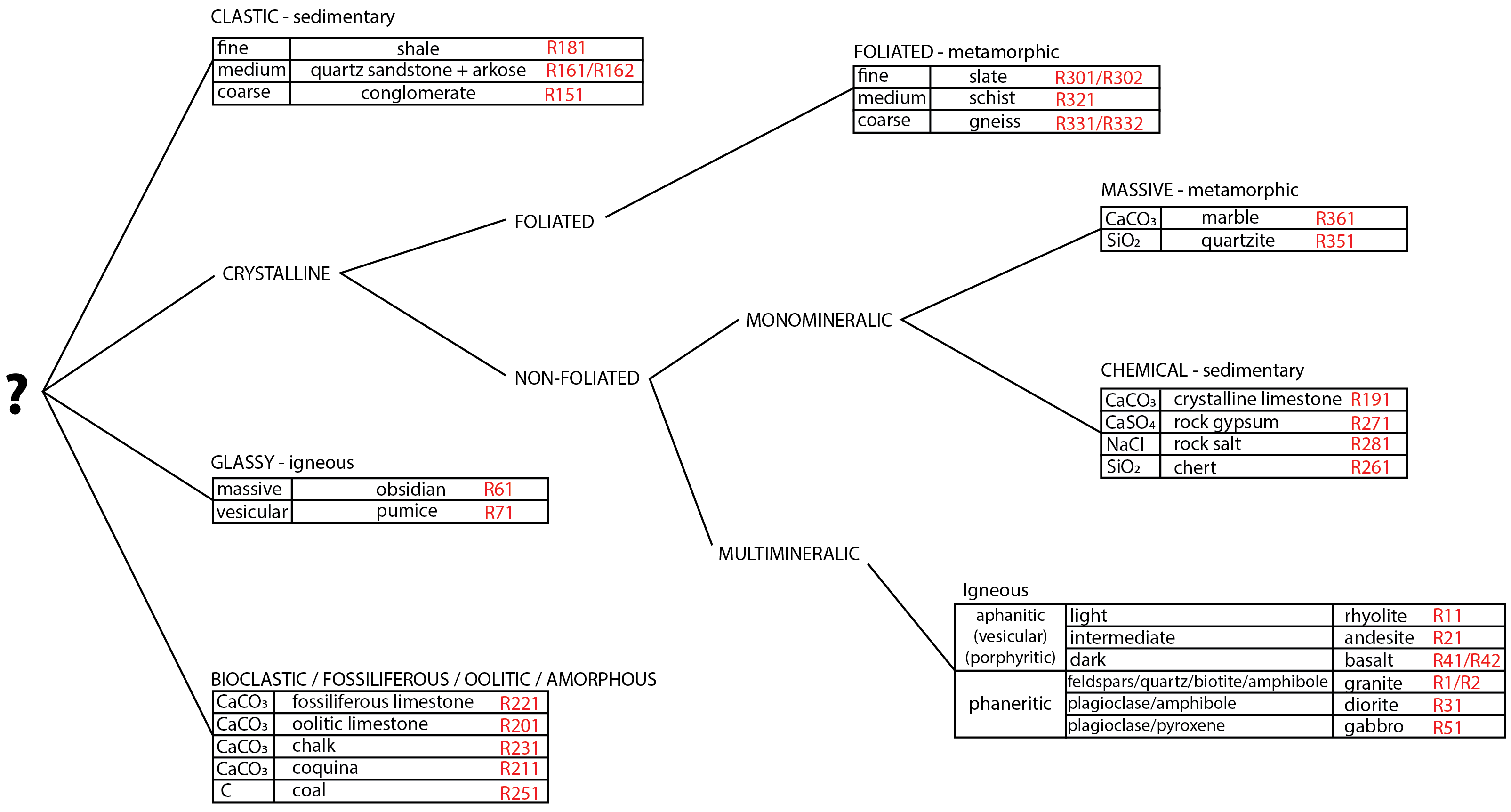 7. Figure illustrates a sequence of faulted sedimentary strata and an igneous dyke. The oldest event illustrated in Figure D is the deposition and lithification of conglomerate during the Pennsylvanian. The conglomerate is overlain by shale, deposited and lithified in the Permian. A disconformity separates the Pennsylvanian and Permian strata from the overlying Jurassic shale. This disconformity likely represents a period of uplift and erosion of any sediment deposited during the Triassic. Following the deposition and lithification of the Jurassic shale, sandstone was deposited during the Cretaceous. At some time following the deposition of the sandstone, an igneous dyke intruded and cross-cut the older sedimentary strata. Later, a fault cross-cut all units. Continued uplift and erosion exposed these units at the surface.

Please consult your instructor for feedback on your map.

3. This area has very little overburden (e.g., soil, glacial till) and very sparse vegetation, meaning that the exposure of bedrock at the surface is excellent. Furthermore, there are strong colour contrasts between the different units that are easily visible in satellite imagery. The areas around Calgary and Vancouver have very little exposure of bedrock at the surface, and are largely covered with overburden, vegetation, and infrastructure. Most areas in Canada, with the exception of some steep mountains and coastal areas, are not well suited to this type of activity using satellite imagery.

6. Topographic contour lines are deflected to form a “V” shape as they cross a stream. The point of the “V” shape always points upstream.

7. Contour lines are approximately parallel to the contacts between the layers of rock in the immediate area around the place marker for Raplee Anticline.

8. The layers of rock in the immediate area around the place marker for Raplee Anticline are approximately horizontal.

9. You would be walking through progressively older rocks. You are starting from the “top” of the pile at the place marker for Raplee Anticline, and as you walk down the slope, over the horizontal layers of rock, you are walking “back in time” following the principle of superposition.

11. Using the 3D capabilities of Google Earth Pro (and in plan view, using the Rule of V’s) we can confirm that these layers are dipping.

13. Dip direction: SE or ESE (either are acceptable here as we are just estimating)

15. Rocks of different colours in the satellite imagery correspond to different mapped units on the geological map. Bedrock map units are shown by coloured polygons with map codes. Notice that some mapped units (e.g., unit Km) include layers of rocks with variable colours. Recall that most geological maps do not map each individual rock type, but instead describe rocks together as formations or groups. Note that the satellite imagery and the units on the map may not line up perfectly as the geological map is not “pinned” directly to the ground in Google Earth.

16. Answers may vary. Some examples are listed below.

21. Map code, colour of unit on the map, full unit name, age, description of lithology(ies), thickness. Note that not all geological maps include unit thickness in the legend.

25. Unit Twl, Willwood Formation, Eocene, siltstone and sandstone. Note that while there are younger materials on this map, carefully reading the legend reveals that these are not formations because they are not yet rocks! The younger Quaternary units are deposits of unconsolidated sediments.

27. Unit Pt (Tensleep Sandstone) and Unit PMa (Amsden Formation; deposited during the Mississippian and Pennsylvanian). Amsden is the oldest of the two.

28. Phosphoria and Gypsum Spring formations, as they contain thickly-bedded and massive gypsum, respectively. Possibly also the Dinwoody Formation, although mining thin stringer veins is unlikely to ever be profitable for an industrial mineral like gypsum.

Block model keys are not provided. Consult your instructor for feedback on your completed block models. 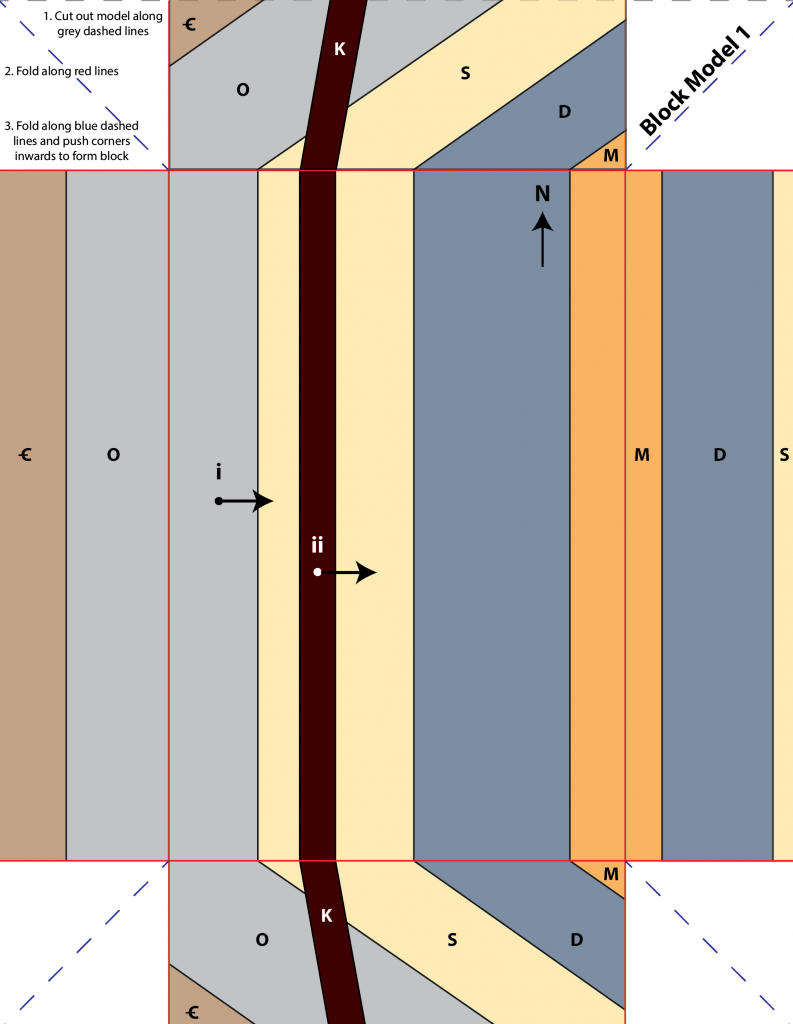 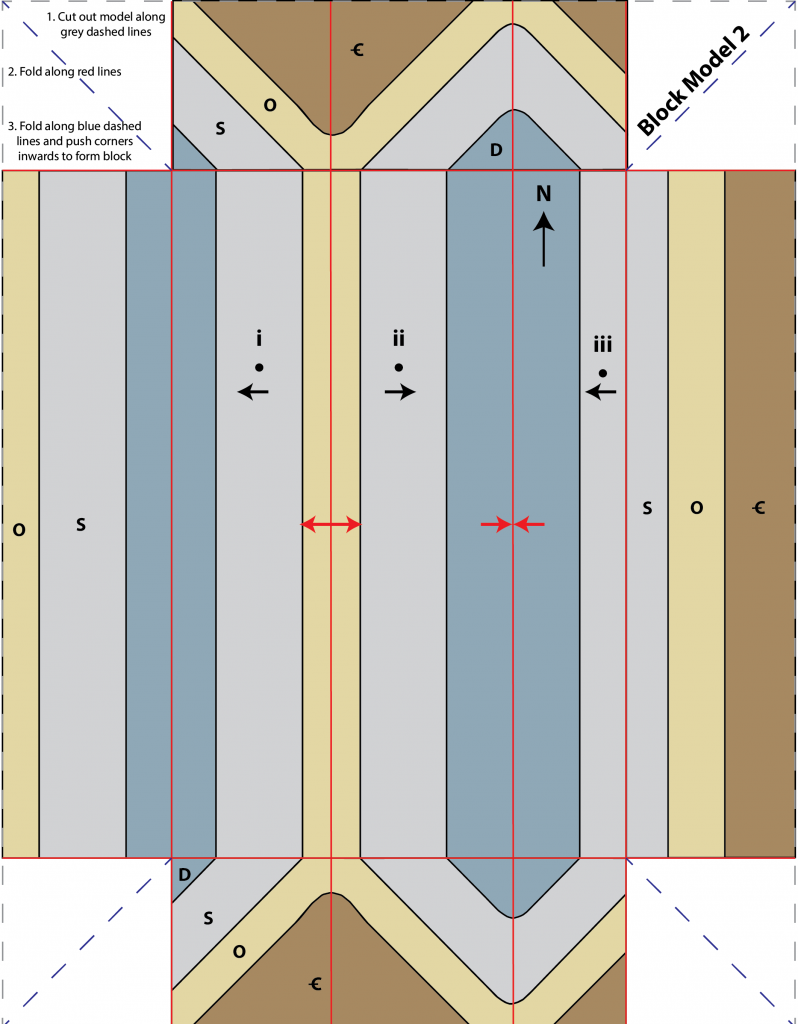 7. Normal fault. Hanging wall has moved down relative to the footwall. 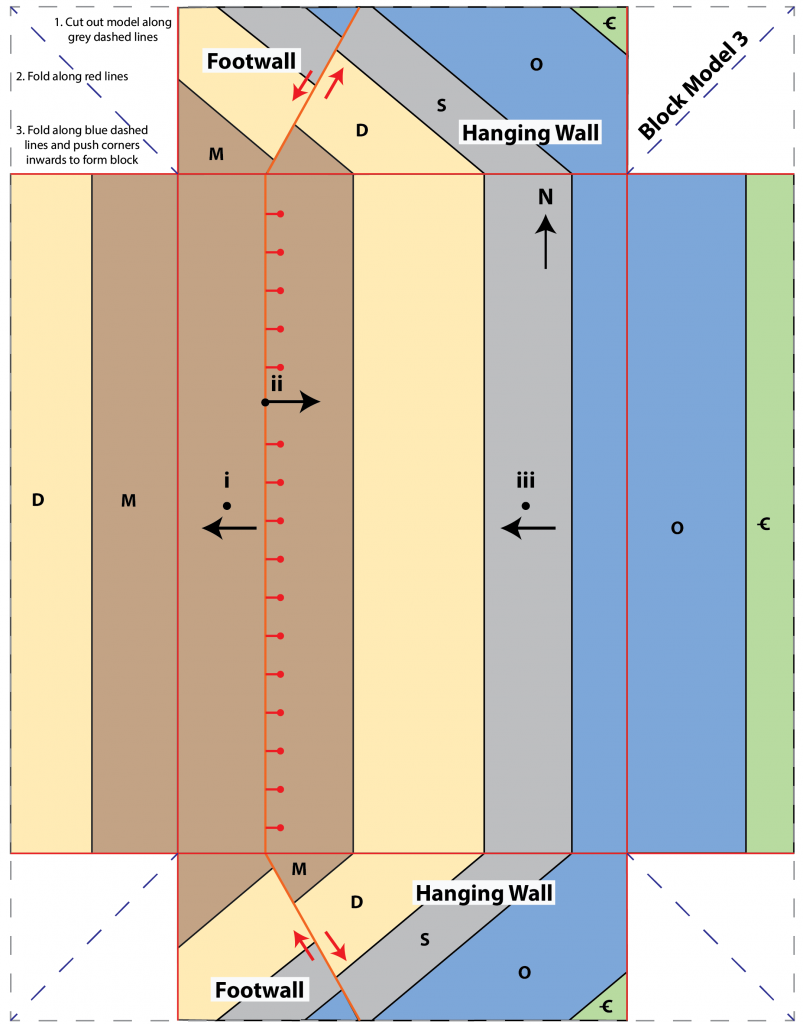 7. Reverse fault. Hanging wall has moved up relative to the footwall. 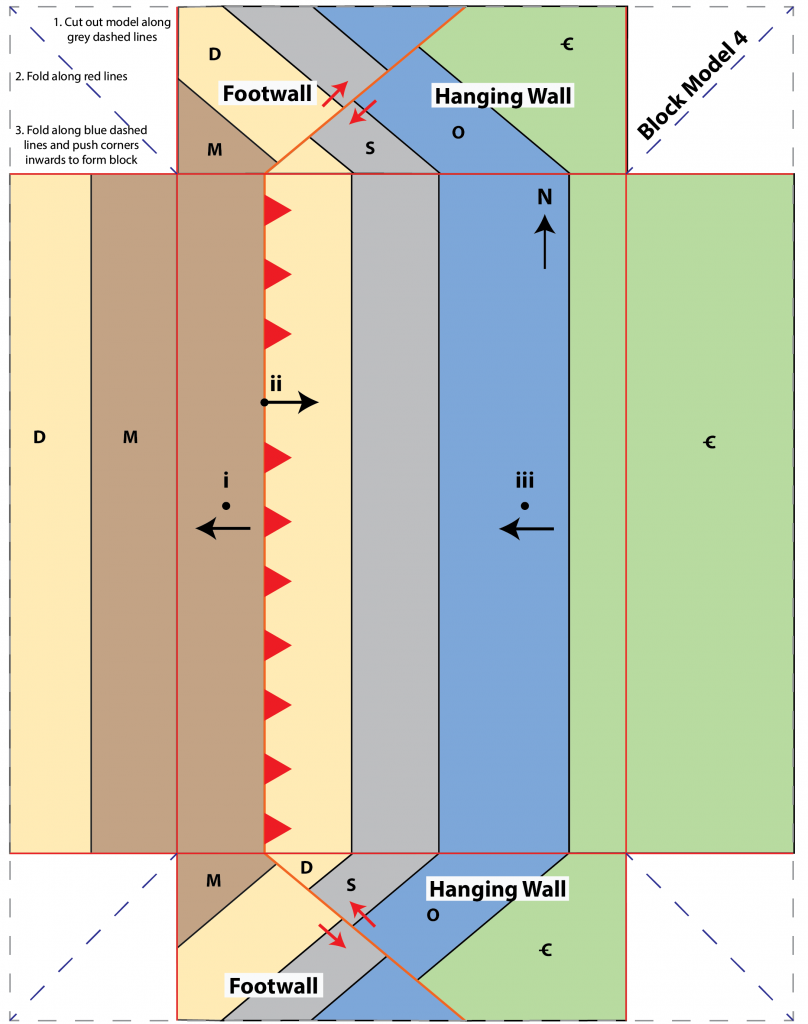 2. The Mississippian formation is horizontal at point i, it is not dipping (dip of 0°).

4. Red arrows should indicate that dyke has been displaced along a left-lateral strike-slip fault.

5. Left-lateral strike-slip fault, looking across the fault the dyke appears to have been displaced to the left and there is not vertical offset of any other units. 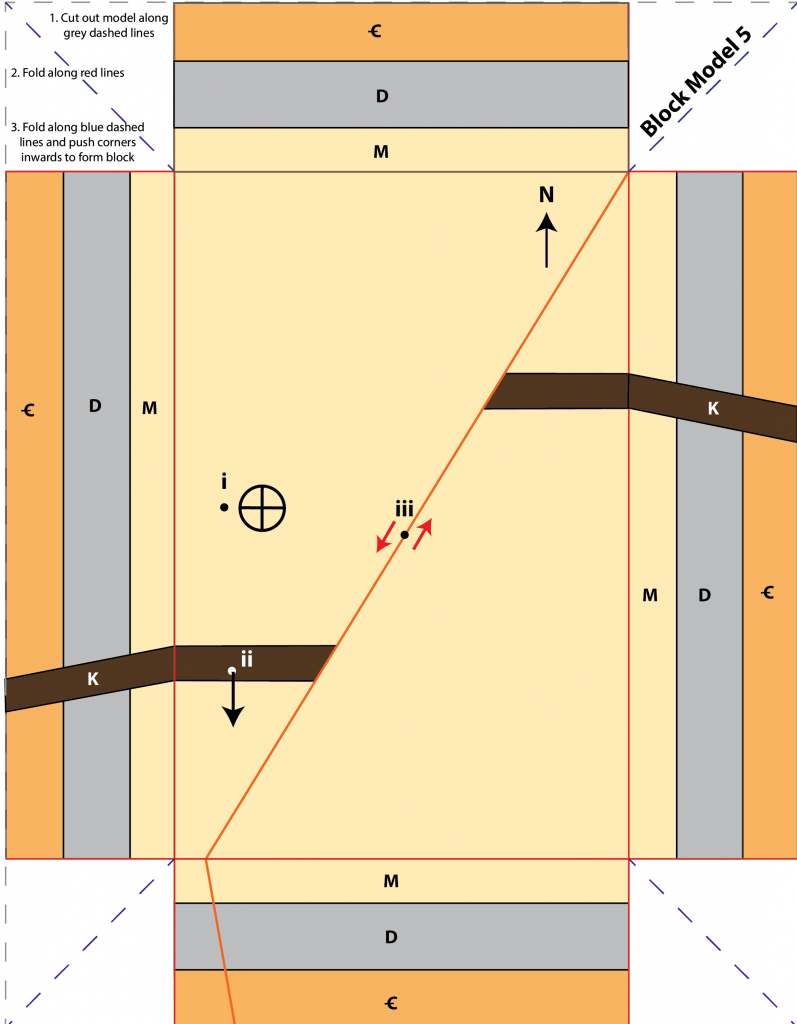 2. Arrows should indicate that the Silurian formation is dipping toward the following directions:

9. Normal fault. Hanging wall has moved down relative to the footwall. Also, notice that the core of the anticline in the hanging wall block does not expose the Ordovician formation because this block has dropped down. 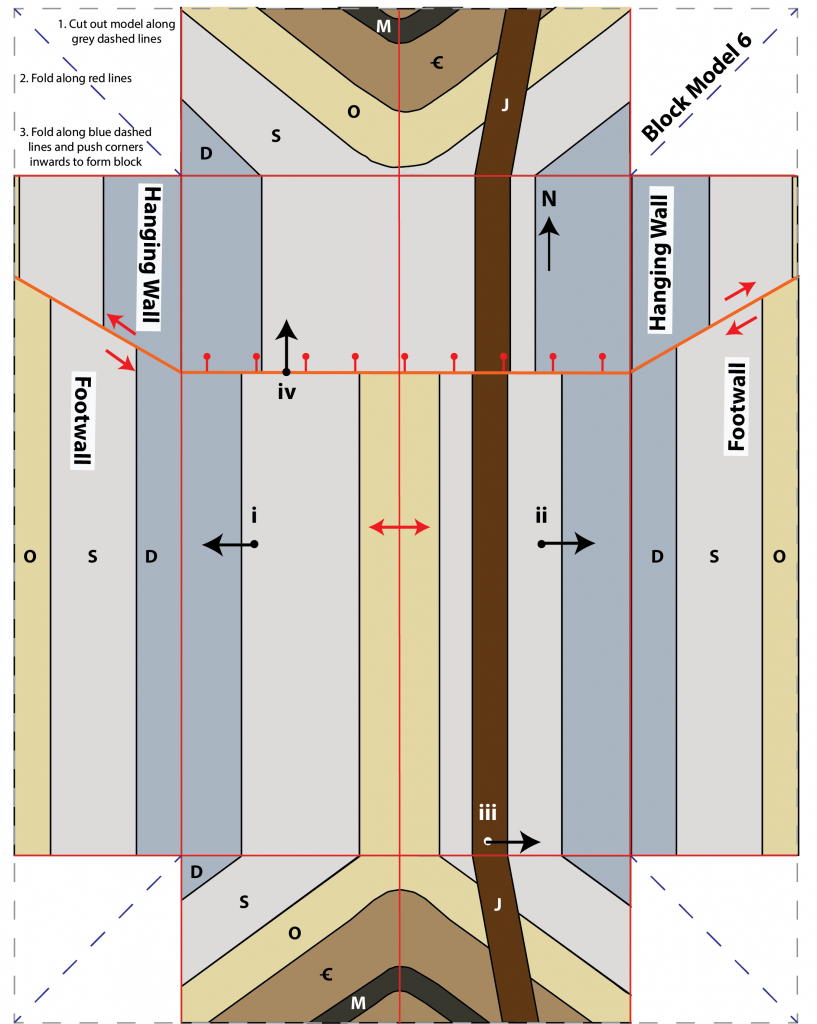 A Practical Guide to Introductory Geology by Siobhan McGoldrick is licensed under a Creative Commons Attribution 4.0 International License, except where otherwise noted.