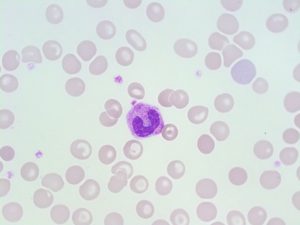 An image from a peripheral blood smear showing a band with a blue dohle body inclusion found in the center of the cell and toxic granulation. 100x oil immersion. From MLS Collection, University of Alberta, https://doi.org/10.7939/R3930P95D 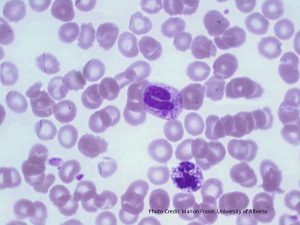 Toxic morphological changes are seen in neutrophils. A left shift with an increase in immature granulocytes typically accompanies toxic changes. In order to report toxic changes, typically two out of the three features should be seen in the majority of neutrophils:

Dark blue-black peroxidase positive granules that appear in the cytoplasm of the neutrophil. Appear very similar to Alder-Reilly bodies found in Alder-Reilly anomaly but is commonly found with other features of toxicity. Can be found in mature neutrophils, bands, and metamyelocytes.

Clear, circular, and unstained cytoplasmic areas that represent phagocytosis or autophagocytosis. Vacuoles may contain bacteria or yeast if the patient is septic.

Pale blue, round or elongated cytoplasmic inclusions containing remnant ribosomal ribonucleic acid (RNA) in parallel rows (rough endoplasmic reticulum). Often present in mature neutrophils and bands near the periphery of the cell. Bodies are non-specific and can appear in several conditions such as pregnancy, cancer, burns, and infections.

Note: A left shift is usually seen on the peripheral blood smear when toxicity is present. A Left shift refers to the increase presence of immature bands and myeloid precusors.

Toxic Changes by Michelle To and Valentin Villatoro is licensed under a Creative Commons Attribution-NonCommercial 4.0 International License, except where otherwise noted.