Antithesis, according to our friend the OED, is “an opposition or contrast of ideas, expressed by using as the corresponding members of two […] sentences or clauses, words which are the opposites of, or strongly contrasted with, each other.” False antithesis occurs when someone presents two ideas that are not in fact in opposition and indicates that to choose or prefer one means you automatically deselect or dislike the other.

For example, someone could create a false antithesis between apples and bananas: “Apples vs. Bananas! Choose Your Side in the Battle Royale! Liking One Means Hating the Other!” You may prefer apples to bananas, but actually like both. The terms are not in opposition, so there’s no need to choose one or the other. 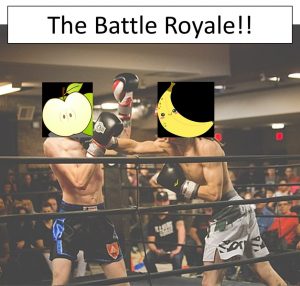 While the fictitious fruit bowl throwdown won’t undermine our societies any time soon, false antithesis applied to politics can do a lot of damage. Say, for example, someone creates a false antithesis like “Democracy or Socialism.” Citizens of democratic societies are unlikely to state that they oppose democracy. Like “justice” or “accountability,” democracy is generally acknowledged to be a good thing. If this antithesis were true, supporting democracy would mean fully renouncing socialism. Socialism, however, is simply a socio-economic model that emphasizes resource redistribution through taxation and the delivery of key services via government agencies. Whether or not a country is socialist has no connection to whether it is democratic. Sweden, a socialist country, is also a democracy. The propagator of the false antithesis wishes to present democracy as inseparable from free market capitalism.

If facts were Barbie dolls, “framing” would be akin to picking out Barbie’s clothes. If you dress Barbie as a firefighter, people may associate her with heroism and support the GoFundMe page she recently set up to pay for her trip to Fiji. They may open their wallets on the assumption that Barbie plans to do good and meaningful work in the South Seas. If you dressed her up as Cat Burglar Barbie, people might not be so quick to donate (“She’s probably trying to evade arrest!”). Barbie herself—that is, the facts of an incident, policy, or communication—remains unchanged. The manner in which she’s dressed up and presented determines how people react.

Research has repeatedly demonstrated that the frame in which news is delivered—the context provided, the other news items to which it is linked, even the metaphors used to describe its content—greatly influence people’s response to the facts and the political positions and activities they consequently advocate (Rathje, 2017; Thibodeau and Boroditsky, 2011).

Feel like you might only be getting Cat Burglar Barbie? Check other sources to see if they’ve “dressed” the facts differently (Doctor Barbie? Student-During-Midterms Barbie? Super-Talkative-Person-on-the-Bus Barbie?)

And Put Your Money Where Your Mouth Is!

And do not share or re-tweet stories that appear suspect. Fake News needs to circulate in order to survive. You can stop it in its tracks.

Call out lies. Don’t ignore them.

“The point of challenging a lie is not to convince the liar, who is likely too far gone in his or her dark purpose to be rehabilitated. But because every lie has an audience, there may still be time to do some good for others.”

Withdraw your support from political candidates, organizations, or media outlets that share misinformation, disinformation, or fake news. The health of our information ecosystem, and of our democracies, relies on a public discourse based in truth.

“Whether we call it post-truth or pre-truth, it is dangerous to ignore reality. And that is what we are talking about here. The danger of post-truth is not just that we allow our opinions and feelings to play a role in shaping what we think of as facts and truth, but that by doing so we take the risk of being estranged from reality itself.”

Digital Citizenship: Misinformation & Data Commodification in the Twenty-First Century by Sarah Gibbs is licensed under a Creative Commons Attribution-NonCommercial-ShareAlike 4.0 International License, except where otherwise noted.